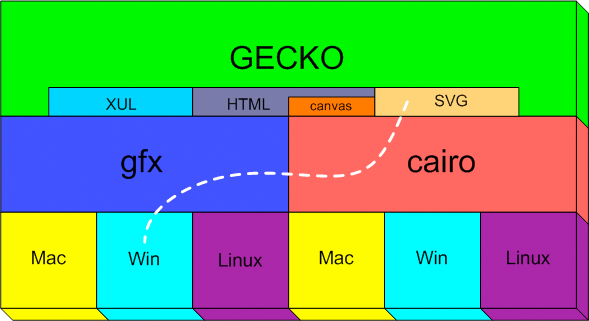 Mozilla had a strong presence at XTech last week. To my mind the high point was the awesome spinning-SVG-containing-HTML demo that roc gave.

This happens to resemble an early Avalon demo (I can’t find a link to it, but I believe there was a video on the web some time after the 2003 Microsoft PDC), which just shows how the web can and will keep up with proprietary eye-candy — at least to a “good enough” degree. What’s good enough? Whatever it takes, including 3D graphics, in due course — but always incrementally developed and deployed, with web and XUL app/extension developers giving feedback and guidance.

Web incrementalism (feedback-guided “little bangs” instead of one grand-planned “big bang”) was the leitmotif of shaver‘s keynote, and this meme reverberated throughout the conference. It seems even XHTML 2 is adapting to “mindshare” (similarity to the web-as-it-is, if not actual backward compatibility).

That’s a hopeful sign, but don’t hold your breath for XHTML 2 on the web any time soon. It was amusing to hear that one of the design aims was less scripting, because scripting is hard for authors and constrains user-agent choice — when all user-agents will need major revision to support XHTML 2, which includes XForms (and meanwhile, the DHTML/AJAX/whatever-you-want-to-call-it JS renaissance continues). In the near term, only Mozilla-based browsers come close to having all the integrated infrastructure needed by XHTML 2, and not all bundled by default. There is no sign of XHTML 2 support from Microsoft, Apple, and Opera.

Still, XML is making its way to the client side of the web, slowly but surely. To help handle XML in JS, I’ve implemented E4X for Firefox 1.1. It isn’t fully hooked up yet, but it will be soon. More in a bit, as I keep my renewed resolution to blog.