This week, a number of Mozillians attended the annual Game Developers Conference in San Francisco to demonstrate how the Web is a competitive platform for gaming and game development.

We’ve worked very hard over the past couple of months on technologies used to speed up the Web for game development, including asm.js, a JavaScript optimization technology and pure-JS-subset target language for compilers; Emscripten, a C++ to JavaScript compiler; and OdinMonkey, the SpiderMonkey JavaScript engine’s compiler for asm.js source.

On Wednesday, we were happy to announce that we’ve teamed up with Epic Games to combine these technologies to bring Epic’s Unreal Engine 3 to the Web.

This is significant because it demonstrates to everyone that game developers and publishers can now take advantage of the reach and scale of the Web without the additional user acquisition friction and even higher costs (infinite on iOS :-P) associated with third-party plugins. These technology advancements also mean improved performance and the ability to port lots of games to the Web on desktops, laptops, and mobile devices. (Note well that asm.js code runs pretty fast on modern browsers, and super-fast when optimized as by OdinMonkey.)

We’ve also developed a new demo for Banana Bread that includes multi-player support and integrates parts of WebRTC for the data channel.

Big thanks to everyone on the gaming team and supporters throughout the Mozilla project for all the hard work to make this possible. I must single out Martin Best, Dave Herman, Vladimir Vukićević (WebGL creator!), Luke Wagner, and Alon Zakai (AKA @kripken).

I was personally thrilled to meet Tim Sweeney, CEO and founder of Epic Games, for breakfast before GDC Thursday. I’d been aware of Tim since his invited talk at POPL 2006. Tim and I were on very much the same page on many things, including JS’s ascendance as a safe target assembly-like language for C++ via asm.js and beyond.

P.S. I’d like to thank Luke Wagner for taking on module ownership of SpiderMonkey, as Dave Mandelin has handed the baton on.

P.P.S. Hot rumor: WebGL in IE11? Source, judge for yourself. I have hopes.

UPDATE: withinwindows.com says WebGL is coming, disabled by default so far, and (look for “UPDATE3” run together at the original source) with a different shader language, IESL based on HLSL, from GLSL ES.

2nd UPDATE: From “UPDATE4” at François Remy’s blog post, GLSL is the default and you set a registry flag to get HLSL. Cool!

Last week started with a bang, with Mozilla’s Firefox OS launch at Mobile World Congress 2013. We announced that Firefox OS had won the support of 18 carriers, four device manufacturers, and a major chipset company (Qualcomm) at a barn-burner of a press conference in Barcelona on Sunday night.

Pictures (the first shows the room less than half-full, pre-press-conference): 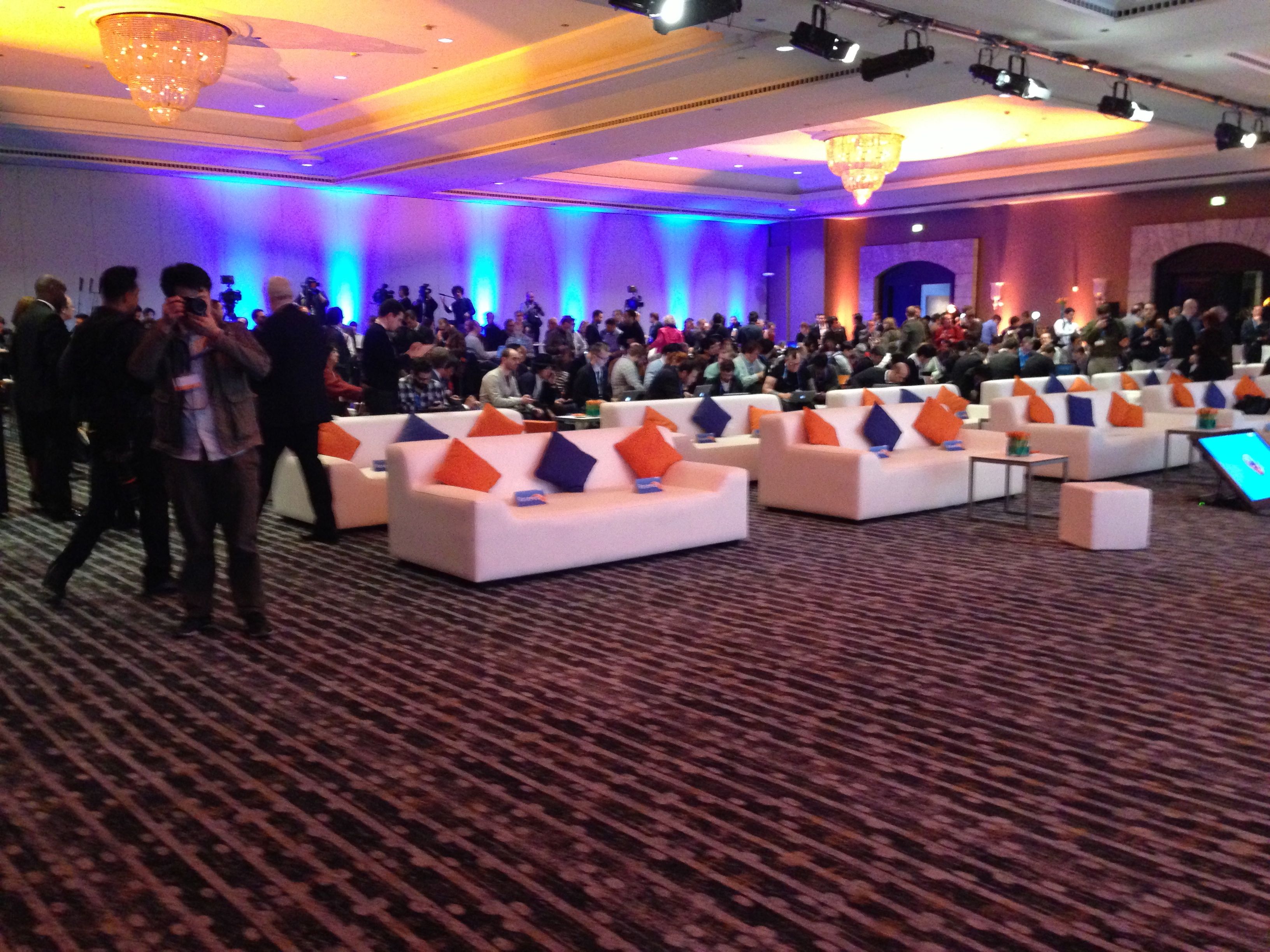 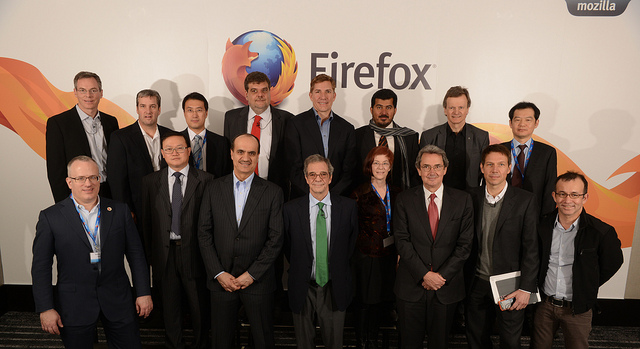 The Mozilla crew who helped at the press conference (others were in Barcelona doing equally important pre-MWC work): 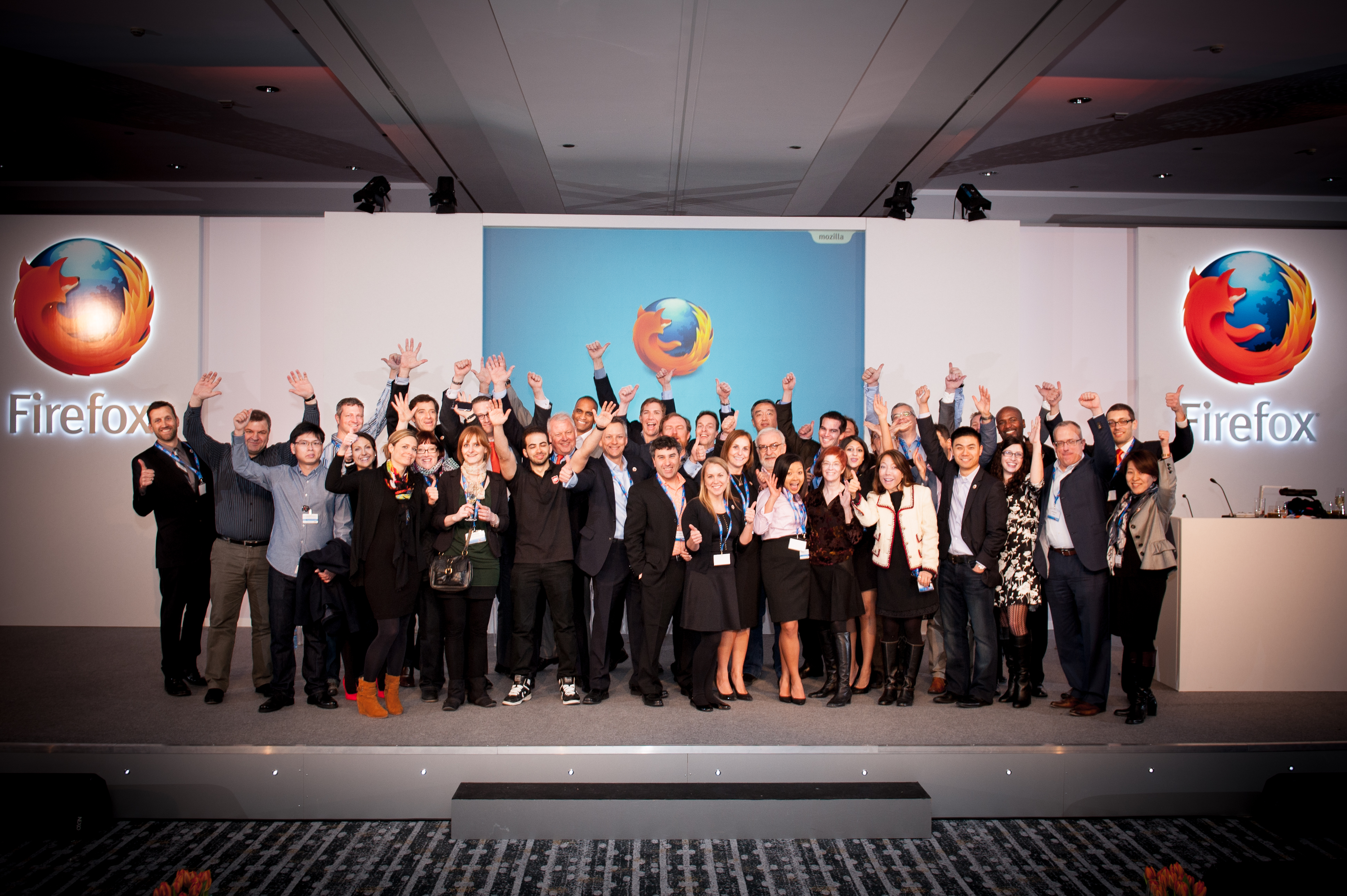 Here is our stunning, always-crowded booth in Hall 8 (“App Planet”): 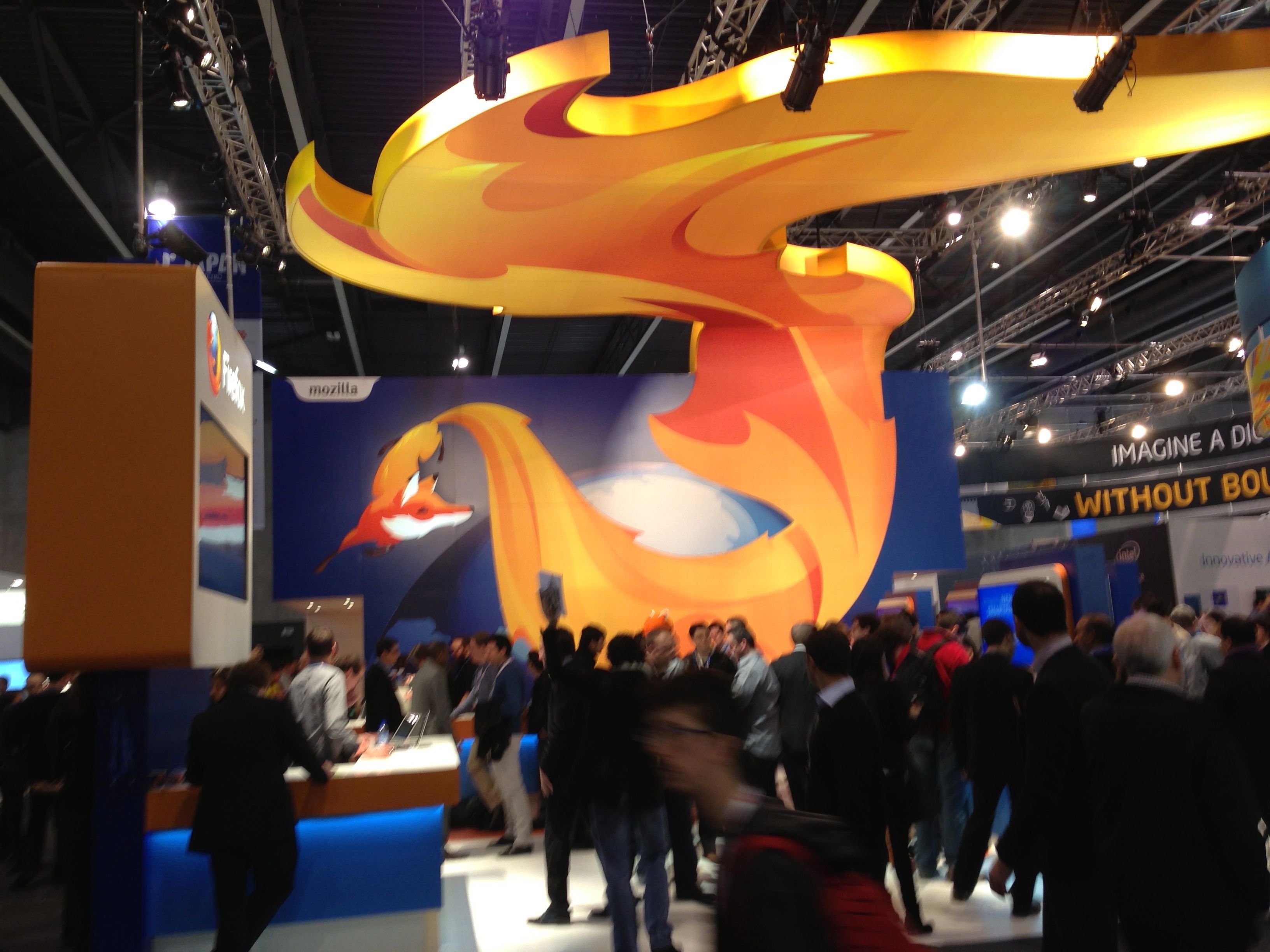 Two days later, the excitement ramped even higher with news of a fifth device maker, Sony.

Our success in attracting support from these partners is due in part to our ability to innovate and standardize the heretofore-missing APIs needed to build fully-capable smartphones purely from web standards. Therefore I will give an update below to my post from last MWC with details on API standardization progress over the last year.

I want not only to identify the good work being done, but also to reinforce that:

The missing APIs must be added to the web platform in order to enable the billions of new mobile users who will be coming online in the next few years to have affordable web-based phones, tablets, and apps. Emerging market consumers and developers generally cannot afford increasingly higher-end, native-app-advantaged smartphones from the two bigs.

The main reason that many developers historically have turned to native OS-specific app platforms and tools is because that was the only way to work with the different hardware elements and proprietary features (e.g., battery status, dialer, SMS, payments system) present on mobile devices. Those developers who bravely soldiered on, trying to use HTML5, were forced to envelop their code in compiled native app wrappers such as Phonegap generates.

There was no technical reason for OS proprietors to disadvantage their web stacks, lock developers into their native stacks, or make their store an exclusive trust anchor. Yet the incumbents did hold the web back by withholding APIs.

Just as the first browsers’ creators exposed file pickers and alert dialogs to work with the underlying OS, we are finally filling in the web platform to include the missing smartphone APIs. This levels the web vs. native playing field. And by following our usual best practices of working in the open and submitting all of our work to the standardization process, we can be confident that the missing functionality will become available on all platforms eventually.

When these APIs are available on all web rendering engines — even desktops and laptops, where the APIs make sense — then developers can be sure that their code will run interoperably, no matter what the underlying operating system. Fragmentation, if any, could arise at the OS level, e.g., due to not updating the OS’s web engine (as happened in Android 2.3).

Barring OS-specific update failures, developers can be sure because they have consolidated cross-OS, cross-browser market power. In today’s competitive browser markets, web developers rule the roost; browser and web engine purveyors seek to win their favor. Developers will not bother with up-and-coming operating systems that deviate more than epsilon from the standards.

The example set by our good friends at Samsung in patching WebKit based on the new specifications validates our approach. It means that if Tizen devices become numerous, it is highly likely that mobile web applications that work on Firefox OS will work on Tizen.

Likwise, we are working with Microsoft on Pointer Events, since touch-enabled web apps must today unify mouse and touch events, and the previous W3C multi-touch work foundered on patent assertions.

The orders-of-magnitude increase in Javascript performance across all engines in the last few years has been stunning. This boost helps to address another web vs. native “gap”. And just around the corner is asm.js — more on that in a future post!

Other performance enhancements include continued work on off main thread compositing and GL layers. Yes, it’s true: the modern mobile-focused web rendering model includes implicit threading in the form of the Compositor thread, and the GPU’s parallel hardware.

As always, standards in progress are subject to change, but they require prototype implementations and user-testing (“user” meaning both developer and consumer). Mozilla remains committed to playing fairly by not forging de-facto standards out of prototypes, rather proposing before disposing and in the end tracking whatever is standardized.

(This is why we are vendor-prefixing the less certain among our new APIs — but I think we should aim to unprefix quickly once we have emerging consensus among implementors.)

Here’s what we’ve achieved in the last year and what we’re working on:

Developers interested in getting to know the new APIs better should look at this Mozilla Hacks post by Robert Nyman, which provides guidance on how to use them along with code examples.

So, Mozilla is leading the effort to complete the web platform on mobile devices. Our work is bearing fruit, as shown by the industry support for Firefox OS and the W3C’s efforts to standardize the new APIs. Even Andy Rubin had some kind words for us (thanks, Andy!).

The main prize for me remains the picture of smiling “mobile web developers” (read: “web developers”) that I can see just around the corner. Based on our MWC experience this year, the Web is in good shape to win that prize.