JSConf.eu 2011 was terrific, bigger and juicier than last year, with a strong sense of community felt from reject.js pre-conf:

Chris Williams makes a moving plea for an end to negativity, meaning trolling, flaming, mocking, and hating in online media.

This sounds utopian, like “an end to history”. But it is good as an aspiration, a constant reminder, since we’ve all seen how many people tend to be more negative online than they are in person. This isn’t just a matter of isolated individual behavior, free of cultural feedback loops. The new media reinforce tribalism.

However, it is hard to be positive about some things. I will persevere….

JSConf.eu had too many awesome talks to cover without bi-locating. Mozillans were well-represented, including dmandelin and dvander on JavaScript JITs, Marijn Haverbeke on DOM implementation techniques, Chris Heilmann on Community JS reloaded – how to rock as a movement, and Andreas Gal on PDF.js. Janet Swisher led the MDC doc sprint in the Hacker Lounge.

I would like to single out Alon Zakai‘s Emscripten talk. Emscripten is an LLVM-to-JS compiler, which means it enables compiling C, C++, and Objective-C (and other languages with LLVM front ends) to JS. What’s more, interpreters written in C for Python, Ruby, and Lua have been compiled and hosted on the web.

Alon’s results are impressive, with lots of room for more wins. At JSConf.eu, jaws dropped and eyes were opened.

For my talk, I reprised some CapitolJS material, including the RiverTrail demo, which won loud and enthusiastic applause when I clicked on the “Parallel” button.

(A few people asked afterward about whether the graphics was running on one of four cores. I’ll repeat the answer here: the particle system demo uses WebGL targeting the GPU for rendering, and the four CPUs’ vector units for n-body solving. All from deadlock-free, data-race-free, seemingly single-threaded JS.)

Here’s the video of my talk:

The amazing Anna Lena Schiller created infographics for all the talks, on the spot — a truly impressive display of concentration and stamina. Here’s the one she did for my talk: 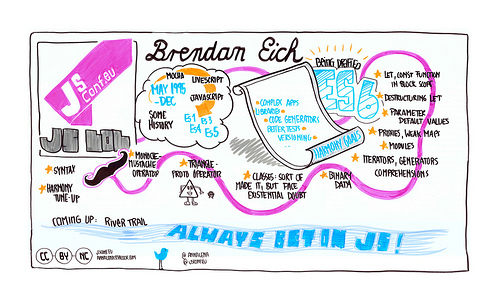 And here are the updated and new slides I presented, showing ES6 work-in-progress (none of it final, so don’t panic) and covering some current controversies. 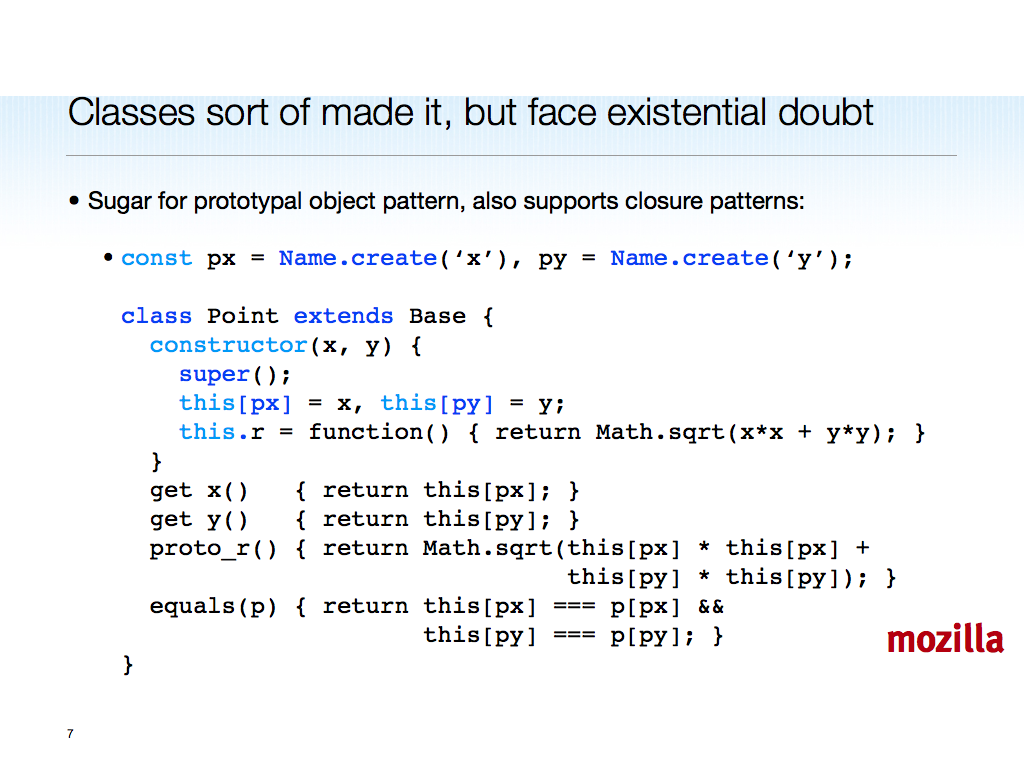 From recent es-discuss messages, I’m afraid that classes are on their way out of ES6. This seems a shame, and avoidable. In hindsight, we did not have all class advocates working in concert on the hard issues last year and earlier this year. But we also do not agree on what’s required for ES6, and some on TC39 view minimizing as future-hostile.

To be blunt, we lost some “classes” advocates who work for Google to Dart. Others at Google on TC39 seem to want more out of ES6 classes than even Dart guarantees (see the future-hostile point above).

I’m not slamming Google as a company here, since it does still support people working on JS in TC39. I respect the people involved and believe they’re for the most part making their own choices. But Dart and other unrelated Google agenda items do impose clear and significant opportunity costs on Google’s standards actiivities.

To remain positive per “An End to Negativity”, I’ll simply conclude that we TC39ers should pay attention to Dart now that it is out, even though we’ve lost time and potential contributions.

The famous Tony Hoare quote that Bill Frantz cited, which argues for deferring classes, is this:

When any new language design project is nearing completion, there is always a mad rush to get new features added before standardization. The rush is mad indeed, because it leads into a trap from which there is no escape. A feature which is omitted can always be added later, when its design and its implications are well understood. A feature which is included before it is fully understood can never be removed later.
From C.A.R.Hoare’s 1980 ACM Turing Award Lecture

I agree with Erik Arvidsson that “[b]y not providing [class] syntax we are continuing to encourage a million incompatible ‘class’ libraries.” I’m with Erik: I would still like to see TC39 agree on minimal classes. But not at any cost.

Onward to new proposals with sometimes-tentative syntax. I’m continuing to “live in a fishbowl” by showing these proposals, even though doing so risks drive-by misinterpretation that we have finalized the sum of all proposals.

So, please don’t freak out. Not all of this will make it as proposed. We may also make cuts. But it’s important to address the use-cases motivating these proposals, take in the fullness of the problem space and potential solutions, and do the hermeneutic spiral. 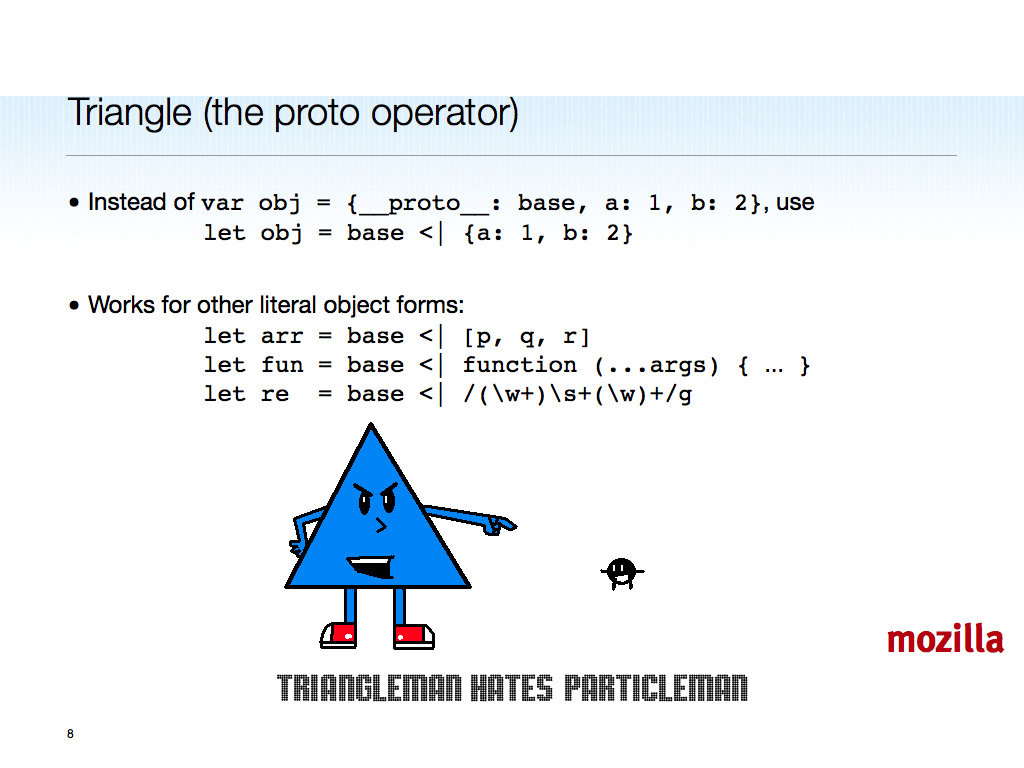 Apart from font issues that make <| look lopsided or non-triangular, this proposal looks good. It replaces the main legitimate use-case for assigning to __proto__: presetting the prototype link in an object literal. 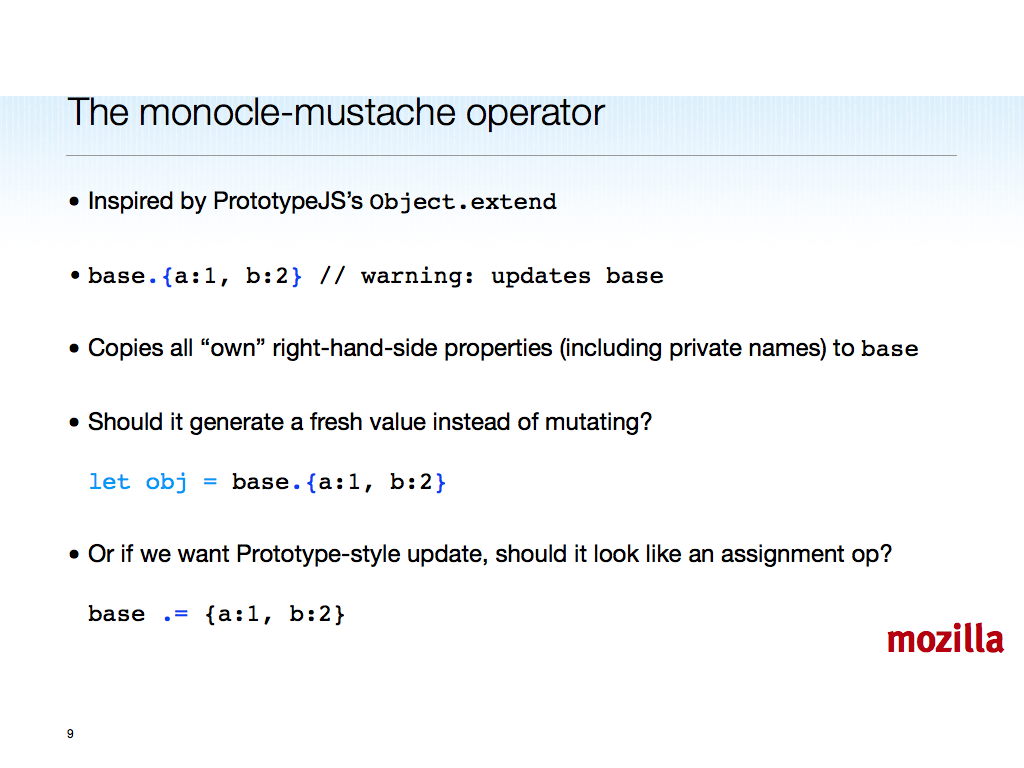 Unlike Object.extend, .{ copies only “own” properties from its right-hand-side object literal, and (this is a crucial difference) it also copies properties with private name object keys (which are non-enumerable by definition). For example, base.{[privateName]: value, publicName: value2} given a private name object reference denoted privateName in scope. 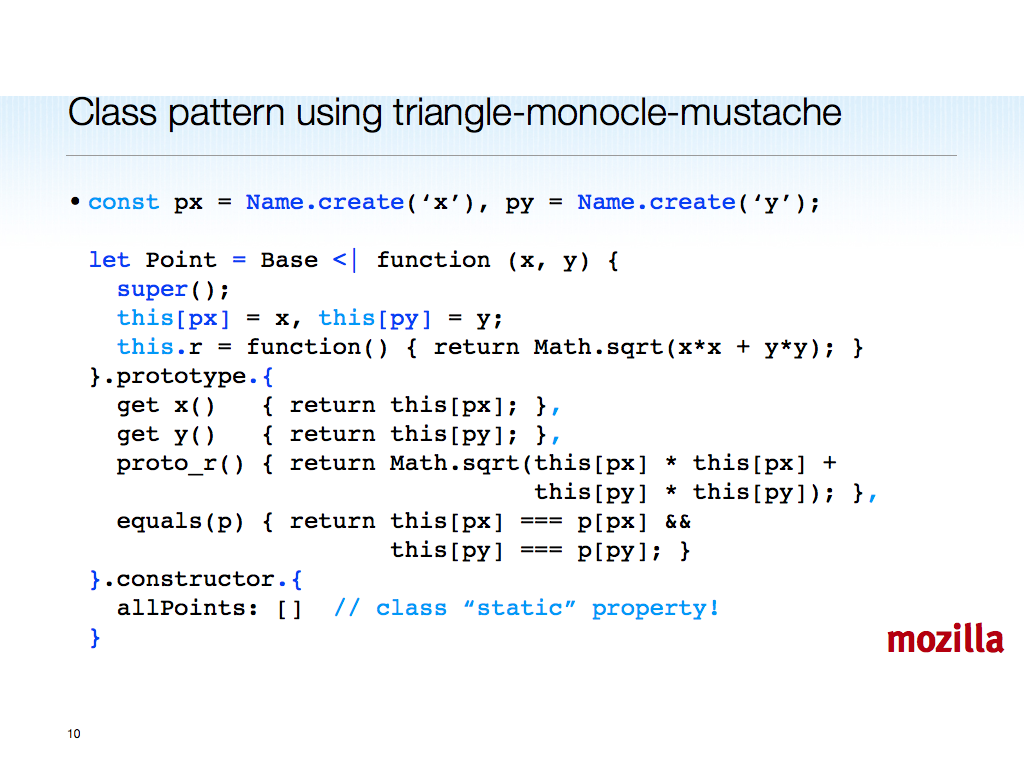 Design patterns point to programming language bugs. Nevertheless, this class pattern shows clever work by Allen Wirfs-Brock, decomposing classes-as-sugar into chained operator expressions. It’s still a bit verbose and error-prone in my opinion, and cries out for the ultimate sugar of minimal class syntax (if only we could agree on that). 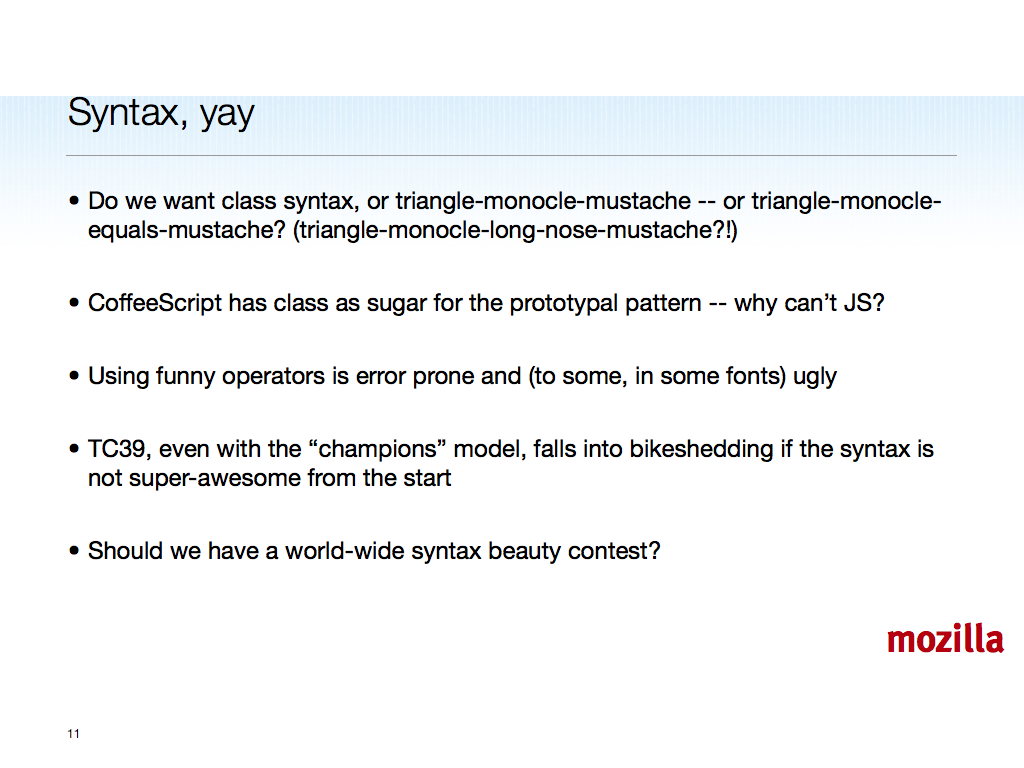 Much of the Dart class syntax design looks good to me. Possibly TC39 can agree to adopt it, with necessary adjustments. It would still be sugar for constructors and prototypes. 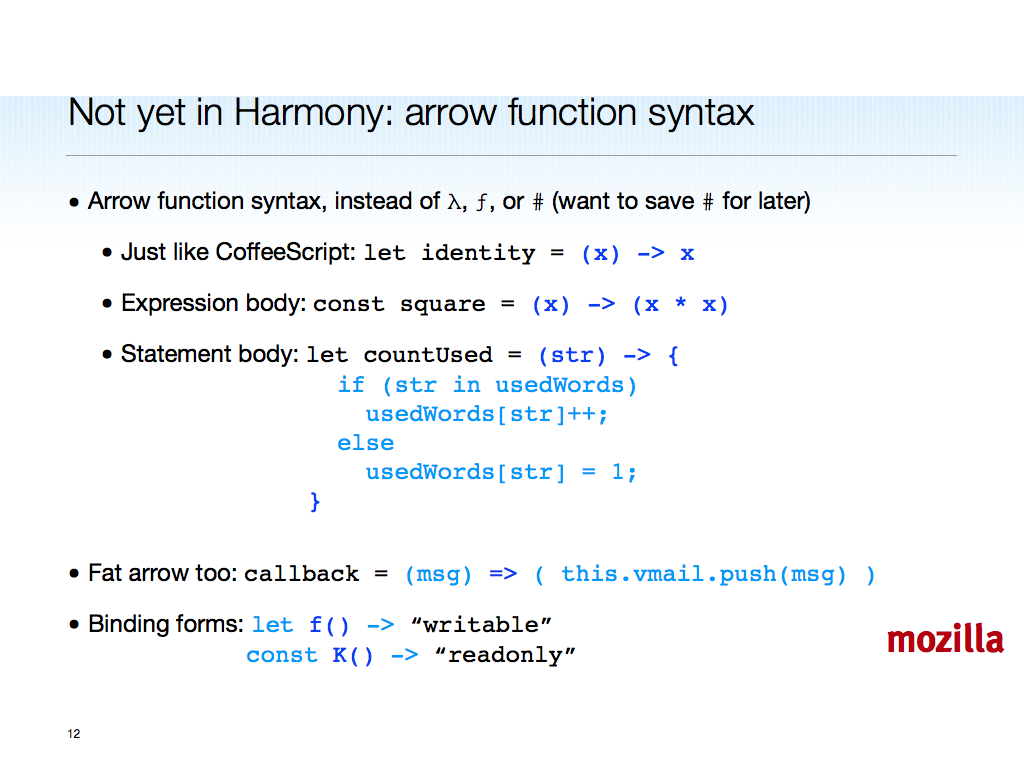 Arrow function syntax faces an uphill battle due to the combination of TC39’s agreement to future-proof by having an unambiguous LR(1) grammar (after ASI and with lookahead restrictions); mixed with the comma expression, (a, b, c), which I copied into JS’s grammar straight from C (not from Java, which left it out, instead providing comma-separated special forms in a few contexts, e.g. for(;;) loop heads). You can’t have both, and we do not want to remove the comma expression in Harmony. 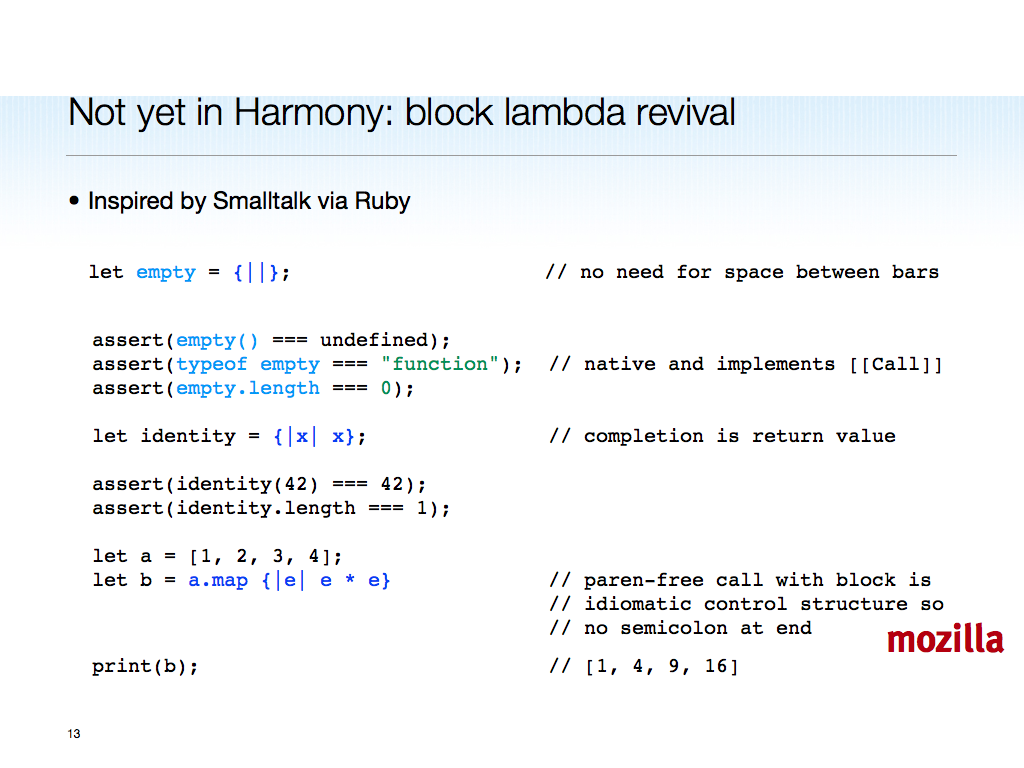 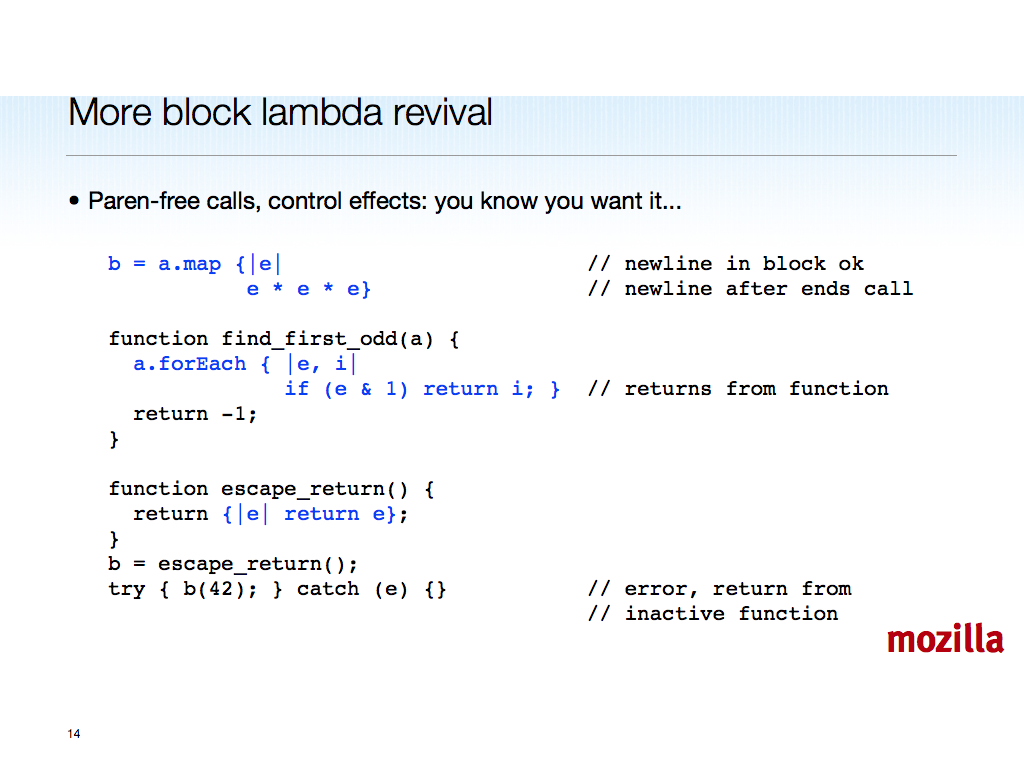 I’m quite in favor of block-lambdas, and they meet formal approval from TC39’s strictest grammarian. Some still object to them as an alien DNA injection from Ruby and Smalltalk, both syntactically and (with Tennent Correspondence Principle conformance regarding return, break, continue, and this) semantically. 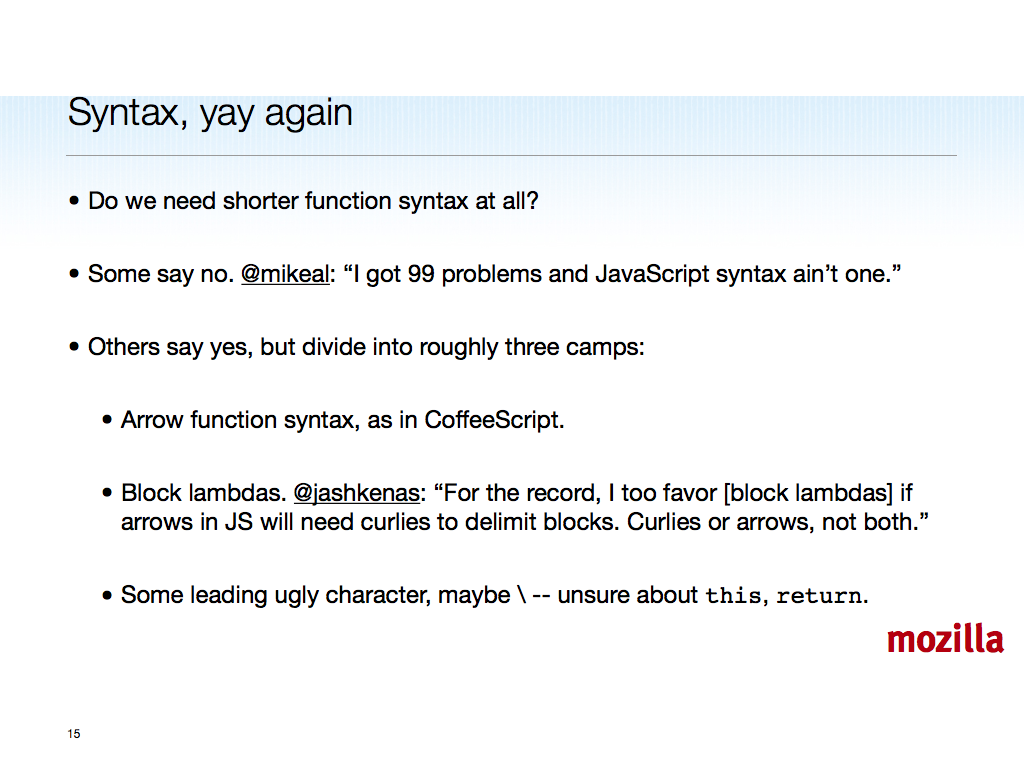 At this point, ES6 has no shorter function syntax. This seems like a loss, and fixable, to me. Your comments welcome, especially if they make novel distinctions that help forge consensus. 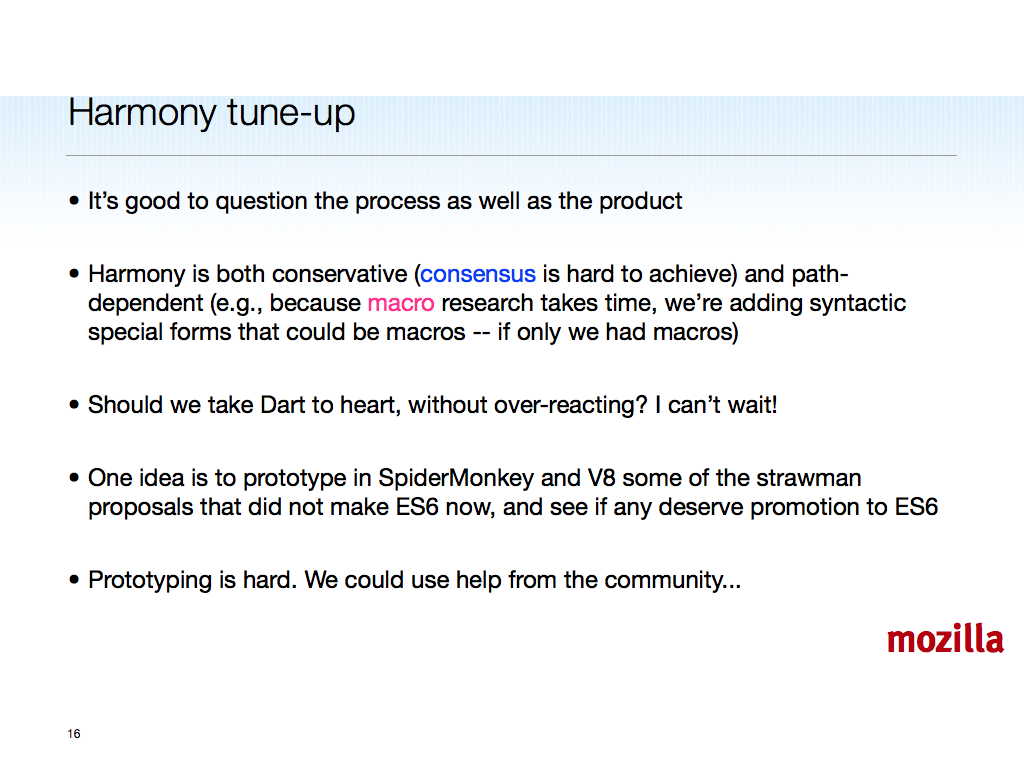 During the talk and Q&A, I recounted how the WHAT-WG was created to counteract a standards body gone wrong (the 2004-era W3C). I then raised the idea of a community-based group, a “JS-WG”, to augment the much healthier but still under-staffed Ecma TC39 committee.

Besides floating more ideas (really, the point is not to bikeshed endlessly or take in too many proposals to digest), a JS-WG worth organizing might actually develop draft specs and prototype implementation patches for JavaScriptCore, SpiderMonkey, and V8. The maintainers of those engines could use the help, and with patches and patched builds, we could scale up user testing beyond what’s in the cards now. 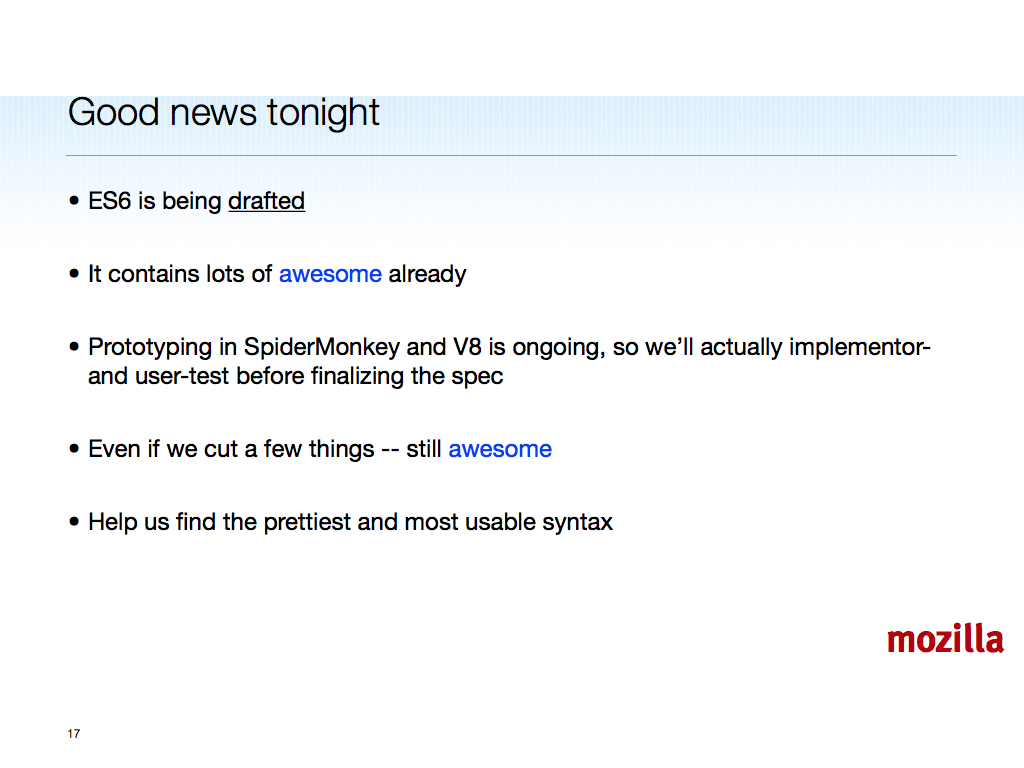 I know it’s hard to believe, but people are finally realizing that with V8 prototyping alongside SpiderMonkey, ES6 is happening. It’ll be prototyped in pieces. I hope many will be “on by default” (e.g., not under a flag in Chrome) well before the new edition is standardized (end of 2013). That’s how we roll in Firefox with SpiderMonkey.